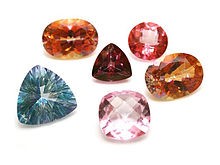 November’s birthstone, the topaz, was thought to have the power to cool boiling water, as well as excessive anger.

The word ‘topaz,’ birthstone for the month of November, comes from a Sanskrit word meaning “fire.” And in ancient lore, the topaz could be used to control heat. It was said to have the power to cool boiling water, as well as excessive anger. As medication, topaz was used to cure fever.

Topaz occurs in a range of magnificent colors – blue, pale green, varying shades of yellow, pink, red, brown and even black. Pure topaz itself is a colorless stone. Red and some pink topaz get their colors from chromium that is substituted for aluminum in the crystals. But most other colors occur due to minor element substitutions and defects in the crystal. Some colors are unstable and can fade away; for example, brown topaz mined in Siberia can be bleached by sunlight. In other stones, color changes can be induced by heating. High energy irradiation and moderate heat treatment of colorless topaz can transform it to blue gemstones.

Chemically, topaz is known as aluminum silicate fluoride hydroxide. Because of strong chemical bonds within this mineral, topaz is the hardest of silicate minerals. Topaz gemstones occur in a large variety of sizes, from tiny crystals to large rocks. The biggest uncut stone, a specimen found in Brazil weighing almost 600 pounds, is on display at the American Museum of Natural History in New York. A famous cut topaz in history is found among the crown jewels of Portugal, a magnificent yellow stone weighing 12 ounces.

This gem, with its lively fire, clarity, beautiful colors and hardness is ideal for jewelry such as clips, necklaces, brooches and bracelets. Pure topaz, when brilliantly cut, can be often mistaken for a diamond. Because of its rarity, topaz is an expensive gem. The most valued and rarest color is red. Imperial topaz-sherry colored varieties of brownish-yellow, orange-yellow and reddish brown-are the most popular topaz stones and command high prices, as do pink colored stones. Light blue and pale yellow topaz are of less value, but are nevertheless stunning in beauty.
Brazil is the largest producer of topaz, the most notable source being the Minas Geranis region. Gems are also found in Russia, the Ukraine, Pakistan, Scotland, Japan and Sri Lanka. In the United States, the gemstones have been found in Colorado and California.

During the Middle Ages, the topaz was used mostly by royalty and clergy. A 13th century belief held that a topaz engraved with a falcon helped its wearer cultivate the goodwill of kings, princes and magnates.
Topaz was once thought to strengthen the mind, increase wisdom, and prevent mental disorders. It was thought to guard against sudden death. Powdered topaz added to wine was used to prevent asthma and insomnia. A cure for weak vision called for immersing the stone in wine for three days and nights, then rubbing the liquid on the eyes.