What Does The Word Viking Mean? 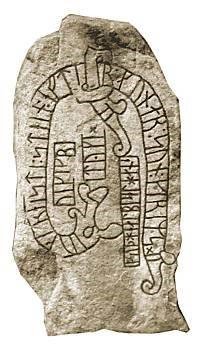 Tóki the Viking raised the stone in
memory of Gunnarr, Grímr's son.
May God help his soul.

What does the word Viking mean? According to hurstwic.org, the word is clearly ancient, appearing in both noun and verb forms on rune stones contemporaneous with the Viking age. Yet, its meaning has changed through the centuries. Even today, the word means different things to different people.

The runic inscriptions suggest that a viking was a man who left his homeland for adventure and profit abroad, with the implication that he planned to return home with his newly won fortune and fame. The word existed in both a noun form (víkingr, the person traveling for adventure) and a verb form (víking, to travel or participate in one of these adventures).

Even the origin of the word is debated. In the old Norse language, víkingr means a man from vík, where vík may have the sense of a bay, or the specific bay called Víkin in the south of Norway. Perhaps the name was applied because the first Viking raiders were from Víkin, or perhaps because the raiders waited in sheltered bays for their victims.

By the time the Sagas of Icelanders came to be written, after the end of the Viking age, the word víkingr still had the sense of a raider, or an adventurer, who traveled overseas looking for fame and fortune. Many saga-age Icelanders and saga heroes are said to have gone on Viking adventures, notably Egill Skalla-Grímsson and his brother Þórólfr (Egils saga chapter 49).

Some Vikings in the sagas are described as reprehensible men: evil-doers and trouble-makers of the worst kind. Many "bad guys" in the stories are introduced "Hann var víkingr mikill" (he was a powerful Viking), including Þórólfr bægifótr, who was not only a great troublemaker while he lived, but also after his death. For years, his ghost tormented and killed the people of the district (Eyrbyggja saga, ch. 9, 30-34, 43, 63).

In some early Christian works, contemporaneous with the sagas, the word víkingr is used to mean murderer or plunderer. The Old Icelandic Homily Book, which dates from the early part of the 13th century, paraphrases one of the parables told by Jesus, using the word víkingr:

And when the king was told what they had done, he sent his army and ordered them to kill the vikings and burn their city.

Later, the word lost the sense of adventurer and came to mean only the worst kind of evil-doers. Indeed, the word was scarcely used at all in the later medieval and Renaissance periods.

The word came back in to wide circulation during the Romantic era in the 19th century, when the study of Viking-age history became fashionable. Artists painted romantic pictures of Viking-age tales. Many ordinary people fancied themselves as latter-day Vikings, decorating their homes in the "Viking" style and dressing in "Viking" clothing.

More serious scholarship in the 20th century suggested that these northern adventurers were not the depraved killers, looters, and rapists depicted in popular stories and tales. And so, for many people, and especially for many English-speaking people, the word Viking was fully rehabilitated. Yet, for some people of the world today, the word Viking retains all of the ugly connotations of casual murder and wanton destruction and horrific brutality.

In these pages, I don't mean to downplay the fact that some Norse people committed these atrocities in the Viking age. But it's worth noting that many other Europeans were also raiding at this time in history, and, like the Vikings, were taking advantage of the changes occurring in the European political and mercantile scenes at this time.

Viking-age documents from other cultures suggest that some Europeans would rather be raided by Vikings than by some of the other raiders active during this period. The Vikings tended to be less interested in sacking towns or in destroying buildings or in mass killings. They were more interested in grabbing the valuables and moving on, and so, for example, they didn't destroy the vineyards at Aquitaine, the way that Frankish raiders did.

Although the Vikings did their share to disrupt Europe's coasts and inland waterways, they probably behaved no worse, and possibly some better, than other European raiders of the time.

The word Viking is used in the more general sense, to refer to all the northern European people during the early medieval period. There are Viking lands and Viking people and Viking culture and Viking society. In the articles about Viking-age farming and about the end of the Vikings, most of these northern people were farmers. And about Viking raids, only a small percentage of these people participated in raids, driven by the importance placed on honor by the society, and by the religious beliefs of these pagan people.