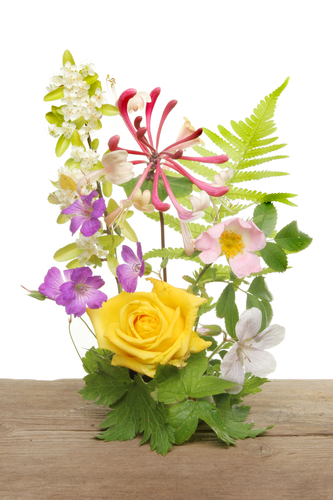 The June birth flowers are the rose and the honeysuckle.

One of the most popular flowers, the rose, is also the flower for those born in June. The rose has more meanings than one can count!

A bouquet of roses means sincere gratitude, whereas a single rose amplifies the meaning of the color (a single red rose means “I REALLY love you”).

A symbol of love, passion, beauty and perfection, the rose is rich in history and meaning. Aphrodite, the Greek goddess of love, presented a rose to Eros, and Cleopatra lured Mark Antony with a room knee-deep in rose petals. Named for the Latin word rosa which means red. Roses are associated with the fifteenth wedding anniversary.

It is a flowering shrub with more than 100 species that bloom in different sizes and colors, and all of which have different meanings. The most common colors are red, pink, yellow and white, however you can find them in various other colors as well including orange, peach, purple and black.

All species of the Rosa come from the northern hemisphere, and normally form as shrubs or bushes with flowers. There are however some that are considered trailing plants or climbers that will grow up walls and over other plants.

The flowers of all species have five petals with the exception of one species, the Rosa sericea which only has four. Most roses contain hook shaped thorns which are there to aid the plant in hanging over other plants as it grows.

The rose is a beloved flower for its beauty and fragrance with a long history of symbolism and meaning. The ancient Greeks and Romans associated the roses with their goddesses of love Aphrodite and Venus which is probably what has led to the red rose being considered the rose of love in today's modern culture. In Rome a wild rose would also be placed on the doorstep of a room where confidential matters were being discussed, telling others not to enter.

In early Christianity, the five petals are linked to the five wounds of Christ, however the leaders were hesitant to adopt this theory. Instead the red rose was adopted as the symbol of the red blood shed by the Christian martyrs, and later it because associated with the Virgin Mary.

The rose is the national flower of both England and the United States, and the state flower of several U.S. states including Iowa, North Dakota, Georgia, New York and Texas. Portland, Oregon holds an annual rose festival to celebrate the rose, and in Southern California there is an annual Rose Parade consisting of floats designed with hundreds of thousands of roses for decorations.

The other June flower is honeysuckle, which is a strong symbol for the everlasting bonds of love.

The Honeysuckle has the botanic name of Lonicera and is a shrub or vine that is found in the Northern Hemisphere. There are about 180 species of honeysuckle, most of which can be found in China which boasts to have 100 species alone. Europe and North America only have about 20 species each.

The leaves are oval shaped and range from 1-10cm in length. Many have bell shaped flowers that contain a sweet, edible nectar. They contain a small red, blue or blackberry which is normally mildly poisonous.

The species Lonicera tartarica is native to Eurasia and has wood cuttings that is used in catnip and sold in cat toys. Many cats will react to the wood and paw, lick or rub against it.