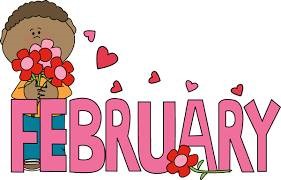 "February is a suitable month for dying.  Everything around is dead, the trees black and frozen so that the appearance of green shoots two months hence seems preposterous, the ground hard and cold, the snow dirty, the winter hateful, hanging on too long."
-  Anna Quindlen, One True Thing

"February is merely as long as is needed to pass the time until March."
-  Dr. J. R. Stockton

"Rich meanings of the prophet-Spring adorn,
Unseen, this colourless sky of folded showers,
And folded winds; no blossom in the bowers;
A poet's face asleep in this grey morn.
Now in the midst of the old world forlorn
A mystic child is set in these still hours.
I keep this time, even before the flowers,
Sacred to all the young and the unborn."
-  Alice Meynell, In February

"The word February is believed to have derived from the name 'Februa' taken from the Roman 'Festival of Purification'.  The root 'februo' meaning to 'I purify by sacrifice'.  As part of the seasonal calendar February is the time of the 'Ice Moon' according to Pagan beliefs, and the period described as the 'Moon of the Dark Red Calf' by Black Elk.  February has also been known as 'Sprout-kale' by the Anglo-Saxons in relation to the time the kale and cabbage was edible."
-  Mystical WWW

"Late February, and the air's so balmy snowdrops and crocuses might be fooled into early blooming. Then, the inevitable blizzard will come, blighting our harbingers of spring, and the numbed yards will go back undercover.  In Florida, it's strawberry season— shortcake, waffles, berries and cream will be penciled on the coffeeshop menus."
-  Gail Mazur, The Idea of Florida During a Winter Thaw

"Away in a meadow all covered with snow
The little old groundhog looks for his shadow
The clouds in the sky determine our fate
If winter will leave us all early or late."
-  Don Halley

"Announced by all the trumpets of the sky,
Arrives the snow, and, driving o'er the fields,
Seems nowhere to alight: the withered air
Hides hills and woods, the river, and the heaven,
And veils the farm-house at the garden's end.
The sled and traveler stopped, the courier's feet
Delayed, all friends shut out, and housemates sit
Around the radiant fireplace, enclosed
In a tumultuous privacy of storm."
-  Ralph Waldo Emerson

"The flowers of late winter and early spring occupy places in our hearts well out of proportion to their size."
-  Gertrude S. Wister

"Surely as cometh the Winter, I know
There are Spring violets under the snow."
-  R. H. Newell

"Still lie the sheltering snows, undimmed and white;
And reigns the winter's pregnant silence still;
No sign of spring, save that the catkins fill,
And willow stems grow daily red and bright.
These are days when ancients held a rite
Of expiation for the old year's ill,
And prayer to purify the new year's will."
-  Helen Hunt Jackson, A Calendar of Sonnet's: February

"Most people, early in November, take last looks at their gardens, are are then prepared to ignore them until the spring.  I am quite sure that a garden doesn't like to be ignored like this.  It doesn't like to be covered in dust sheets, as though it were an old room which you had shut up during the winter.  Especially since a garden knows how gay and delightful it can be, even in the very frozen heart of the winter, if you only give it a chance."
-  Beverley Nichols

"If apples were pears
And peaches were plums
And the rose had a different name.
If tigers were bears
And fingers were thumbs
I'd love you just the same."
-  Valentine's Day Songs and Poems

"Wishing and wanting
to see you,
I step on thin ice."
-  Madoka Mayuzumi

"Loud are the thunder drums in the tents of the mountains.
Oh, long, long
Have we eaten chia seeds
and dried deer's flesh of the summer killing.
We are tired of our huts
and the smoky smell of our clothing.
We are sick with the desire for the sun
And the grass on the mountain."
-  Paiute Late Winter Song

"The birds are gone, The ground is white,
The winds are wild, They chill and bite;
The ground is thick with slush and sleet,
And I barely feel my feet."
-  Winter Poems

"Standing in a valley,
With the mist coming in,
Berries grow on the holly bushes.
Robins hide in snow-ridden woods.
If I could stay here, I would."
-  Bethan Williams

"In winter's cold and sparkling snow,
The garden in my mind does grow.
I look outside to blinding white,
And see my tulips blooming bright.
And over there a sweet carnation,
Softly scents my imagination.

On this cold and freezing day,
The Russian sage does gently sway,
And miniature roses perfume the air,
I can see them blooming there.
Though days are short, my vision's clear.
And through the snow, the buds appear.

In my mind, clematis climbs,
And morning glories do entwine.
Woodland phlox and scarlet pinks,
Replace the frost, if I just blink.
My inner eye sees past the snow.
And in my mind, my garden grows."
-  Cynthia Adams, Winter Garden.

"From December to March, there are for many of
us three gardens:
the garden outdoors,
the garden of pots and bowls in the house,
and the garden of the mind's eye."
-  Katherine S. White