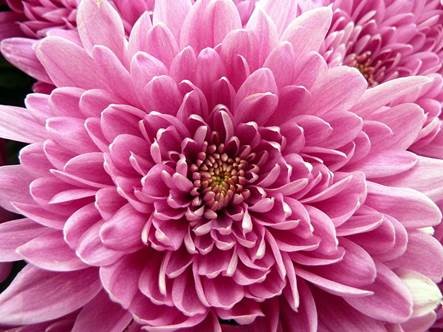 According to the folks at ProFlowers, Chrysanthemums or “mums” as they are more commonly known are one of the most widely cultivated flowers in the world, and the birthday flower for those born in the month of November. A native to Asia and northeastern Europe, their name comes from the Greek words “chrysos,” meaning gold, and “anthemon,” which means flower. They are a member of the daisy family, which also includes asters, zinnias and coneflowers. Many varieties of chrysanthemums bloom during the fall months; however, you can also find chrysanthemums blooming just about any time of the year.

What makes these plants so interesting is the diversity of flower variations you can find. From puffy poms to the spindly spider and quill flowers, there is a chrysanthemum for every taste. Plants feature dark green leaves and relatively large flowers, with the most common colors being yellow, pink, red or white. Contrary to their appearance, the chrysanthemum’s pom blooms are not just one single large flower, but rather a grouping of many tiny flowers.

Chrysanthemums in History - As early as the 15th century BC, the chrysanthemum was cultivated as a flowering herb in China. It is also one of the four plants known in Chinese culture as “The Four Gentlemen,” which were depicted in much of the art beginning during the Song Dynasty, 960 to 1279. The chrysanthemum flower was used to represent autumn in this style of paintings.

Colors and Symbolism - The chrysanthemum is one of the most popular flowers, outshined only by the rose. It is a traditional flower to give on Mother’s Day. It symbolizes the qualities of optimism and joy.

Red flowers express true love, while yellow refers to a wounded heart, and white the virtue of honesty.

The official flower of the city of Chicago is the chrysanthemum.

In China chrysanthemums are considered a symbol of stateliness and is a popular topic of many of the country’s poets.

Chrysanthemums are the flower of choice to give on a 13th wedding anniversary.

Fun Facts about Chrysanthemums - Chrysanthemum tea is popular in parts of Asia. In China the leaves are eaten steamed and boiled. In Korea chrysanthemum flowers are used to add flavor to wine known as gukhwaju.