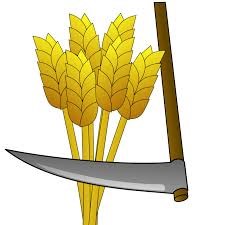 Since the Celtic day starts with sunset, the celebration of Lughnasadh takes place on the evening before the calendric date.  First Harvest, the name of this festival known as Lughnasadh is Irish Gaelic for "Commemoration of Lugh". Some authors give the meaning as marriage, gathering or feast (in the name of) of Lugh. The meaning remains basically the same: Lugh is the Deity of Lughnasadh, and there is a feast.

Although Lugh gives his name to this festival, it is also associated with Lugh's foster mother Tailtiu, who is said to have cleared the way for the introduction of agriculture in Ireland, thus linking Lughnasadh to the land and the harvest.

Lughnasadh marks the beginning of the noticeable descent of the Sun into the darkness of winter. From the connection between the Earth (female principle) and the Sun (male principle), the marriage of the Sky Father (Sun God) with the Earth Mother we celebrated at Bealtaine, emerge the fruits of the first harvest of the year. Lughnasadh is a time of joy about the first fruits. It is also a time of tension, because the dark days of winter are coming nearer, and most of the harvest is not brought in and stored away yet.

The God of the harvest is the Green Man (also known as John Barleycorn). He sacrifices himself every year in order to enable human life on Earth. In some areas his death is mourned with wreaths decorated with poppies or cornflowers.

The grain is cut, part of it goes into bread and nutrition, another part is stored away and used as seeds next spring, to create new life. Looking at that, thoughts about sacrifice, transformation, death and rebirth are also part of Lughnasadh.

The celebration of Lughnasadh includes the ritual cutting of the first grain and an offering thereof, possibly the making of a first meal and the ritual eating of it, as well as dancing. Fires are mentioned, but fire or light do not play such a prominent role as with the other fire festivals. This is probably because the coming month, August, is a warm month in most of Europe, with still long daylight hours, where no fire is needed. Lughnasadh celebrations are reported from Ireland, Isle of Man, Scotland, Wales and Cornwall.

The Deities of Lughnasadh are Danu (Anu), the Mother of Gods and Men, and Lugh, the patron of scholars, craftsmen, warriors and magicians. Lugh is also known as Lugh Samildánach (the Many Skilled) and Lugh Lámhfada (Lugh with the Long Arm). It is disputed among authors whether this refers to Lugh's magical spear or to the rays of the Sun. Lugh seems to have been worshipped, like his Greek and Roman correspondences Hermes and Mercury, mostly on elevations, hills or mountaintops.