Mapping the U.K.’s Many, Many Names for Streams 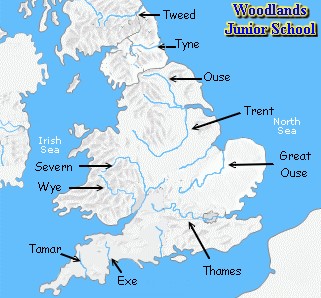 One man’s brook is another man’s allt. Or nant. Or gill. Or burn according to atlasobscura.com.

A few years ago, the climate adaptation researcher Ben Smith—then a Ph.D. student at Kings College London—was working on his dissertation, about the effectiveness of water restoration projects in the United Kingdom. As with most scholarly projects, this involved spending hours and hours with the same information.

“I’d been staring at lists of rivers… [for] far too much time,” he says, when certain patterns of terminology began emerging. While the northern U.K. was squiggled all over with “burns,” the southeast was instead full of “nants” and “afons.”

“I got interested in the way [the words] varied between regions,” says Smith. So he decided to start mapping them. This year, inspired by a query from the landscape linguist Robert McFarlane, he returned to the project, and recently completed a set of maps of the U.K., twisted all over with different words for “stream.”

Smith’s creations are a form of dialect map, a 19th-century invention that aims to connect how people speak to where they live. The genre has been made familiar to modern audiences through online surveys, such as that popular 2013 New York Times questionnaire that asked its readers whether they say “crawdad,” “crayfish,” or “mudbug,” and then heat-mapped the results. Instead of mobilizing a bicycling surveyor or an internet quiz, Smith dredged his information up from a public data set: the Ordnance Survey of Open Rivers, which has mapped about 144,000 kilometers of watercourses in the U.K.

Most people use the survey to think through future scenarios. If toxic sludge accidentally spilled in this river, where would it end up? But when Smith sorted the waterways by title instead, they offered a snapshot of a past-inflected present.

“It’s really clear from the distribution of ‘allt’ where the traditional areas of Gaellic speakers were,” he says—up in the north, of course. “And the use of ‘beck’”—clustered mostly around current-day Yorkshire, Cumbria and Manchester—“is a pretty good match for the area that used to be under Danelaw in the 10th century.” Smith is also intrigued by the outliers. Although the word “burn” is most common in Scotland, some burns appear in the southwest, and there’s a pocket of unexpected gills in the southeast.

Bodies of water have proven to be a fruitful well for this type of work. Back in 2011, the geographer Derek Watkins used the USGS’s National Hydrography Dataset to map generic stream names in the United States. (It turns out ‘brook’ made its way from the southern U.K. to New England, Louisiana is full of bayous, and Pennsylvania’s got the runs.) After Smith’s maps gained wide attention on Twitter, the data scientist Phil Taylor did the same thing with the U.K.’s lakes, not to mention its lochs, waters, loughs, llyns, broads, pools, meres, and tarns.

Smith likes that these types of maps draw attention to both linguistic and topographical diversity. “I hope it encourages people to think about their local environment, and engage with the landscape,” he says. “Also… even in the U.K. there are big regional differences in dialect, and that’s important to try to keep.”

And even though he still spends a good amount of time staring at lists of rivers, he adds, the sheer variety of terms revealed by the maps has surprised even him. “I had no idea how many different variants for ‘stream’ there were,” he says.