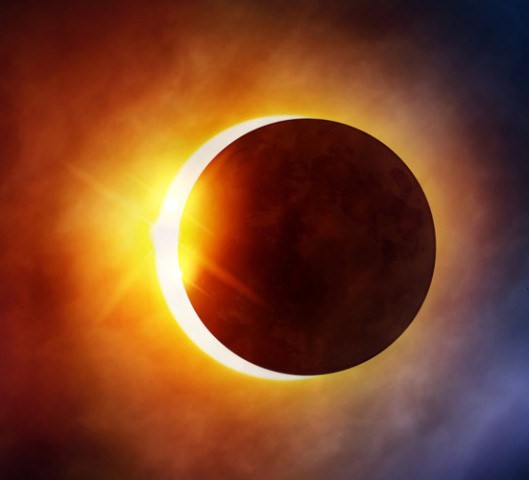 The New Moon on Thursday July 12, 2018 at 20' Cancer 41", according to Jamie Partridge at astrologyking.com, is a partial solar eclipse. This Solar Eclipse astrology is influenced by a powerful opposition to minor planet Pluto. This indicates some sort of crisis with your self-esteem, a relationship or an event. An equally intense fixed star brings the potential for neurotic distress triggered by a deeply buried subconscious fear of disaster.

The Eclipse signals the right time to transform something in your life holding you back from happiness and success. A fortunate Grand Trine configuration allows you to apply this transformation to your love life, finances or creative work. Hard work and determination will unleash the potential and opportunity held within the grand trine to help avert a personal crisis.

The strongest and most important aspect in astrology is Sun conjunct Moon. It means all possibilities are on the table and you can rightly put yourself in the forefront of new plans for the future. It is time to question your old habits and behaviors as you search for new and inventive ways to make progress. This is the ideal time to make a fresh start, so write your new goals down on a sheet of paper. The best time for making a new start is from the solar eclipse to the July 27 Lunar Eclipse.

At 20∞ Cancer41? CancerÝ the Eclipse actually falls within the Gemini Constellation. Due to the process of Precession of the Equinoxes, the Sun Signs are almost a whole Sign out of alignment with the Constellations from which they were named. Our zodiac was developed over 2000 years ago as a coˆrdinate system for recording astronomical data. It was totally unrelated to astrological activity. Observation of the planets for astrological purposes continued to be related to the visible constellations.Ý It is for this reason I use fixed stars instead of Sun Signs as a backdrop to the planets. I use the Signs as they were originally intended, as a convenient measuring device to divide the horoscope equally into 12 Signs and 36 Decans.

At 20∞ Cancer 29? is the brightest star in Gemini Constellation, fixed star Castor. Like the planet Mercury it gives distinction, a keen intellect, success in law and many travels, fondness for horses, sudden fame and honor but often followed by loss of fortune and disgrace, sickness, trouble and great affliction. Its natives are said to be mischievous and prone to violence.

Castor is a star of misfortune with the specific association with breaking an arm or leg. It also gives proneness to nervous breakdowns and neurotic distress. Castor represent the fine line between genius and madness. According to Dr. Morse:

Castor, the former Apollo, is in fact a Binary Pair of stars, as once were Sun and Phaeton. A binary pair evokes a deep-seated fear in humanity, an unconscious recall of The Disaster, so that we tend to react to it just as one does all the wrong things in a moment of crisis, if it happens to half-awaken in one some earlier trauma of the same kind.

Sun opposite Pluto indicates some sort of crisis with your self-esteem, a relationship or an event. This may be due to a self-destructive character trait such as addiction, spying or stubbornness. In relationships, you may be the subject of, or the perpetrator of, manipulation, jealousy, domination or spying. Events may include the breakdown of an appliance or car, theft, violence, or the destruction of a possession by people of a natural disaster. Things like this will more likely to happen if you have been stubbornly resisting change, or have engaged in some habit that is destructive to yourself or others.

Things like this will seem to happen out of your control. In a way they help you to realize that you don’t need to have total control over others or your environment. Even though you may experience a bruised ego from the solar eclipse, there is also great potential for positives if you are open to change. Change may be forced upon you, or better still, you may instigate it and this solar eclipse will be less disruptive.

A solar eclipse opposite Pluto urges you to transform for the better. To evolve your soul so that you may live a better life and experience more satisfaction. It is most common that this would occur through a close relationship, such as a family member, close friend or partner. The opposition to Pluto is under one degree orb so is a very powerful influence on the solar eclipse. This adds to the intensity of Castor and it subconscious fear of disaster.

Pluto retrograde representsÝ is a time of reflection about power and control in your life. If people have controlled or manipulating you then now is the time to let them go. If you have been too controlling of others or situations then it is time to let go. This is not a time for power tripping but a time for elimination. Fated events and repeating themes will reinforce which of your controlling habits, compulsions, addictions or prejudices must be eliminated. Destroying things which have control over you will increase your spiritual power and lead to personal mastery.

Pluto retrograde 2018 is ideal for taking a direct, even aggressive approach to dealing with your Pluto retrograde power and control issues. Unleash your inner warrior and confidently stand up for your rights if you have been dominated or abused. Intense determination, willpower and fighting spirit will help you overcome adversity, addiction or illness. Using the power of your mind you can transform a personal crisis into a success story. Miracles are possible.

From Castor and Pluto it seems the Solar Eclipse July 2018 astrology symbolises transformation in response to a crisis but does not offer much in the way of help. Fortunately, the chart above shows a Grand Trine aspect pattern which is the blue triangle linking Venus, Saturn and Uranus. The fortunate trine aspects create a balanced and harmonious blend of the planetary energies. Grand trines are very fortunate, showing great natural talent and creative potential.

Venus trine Saturn is ideal for committing to a relationship and making long-term investments. All relationships can benefit from your sensible approach and steady affections. New love found now may be with someone from a different age group and would likely be a long-lasting, soul mate union. Existing relationships will enjoy closer bonding and stability. If a relationship has been stressful lately then this is a good time to work through the problem and find a solution.

Venus trine Uranus gives an urge to try something new that can apply to all areas of life, from hobbies to romance. Your affections will be stimulated and new love is possible. If you already have a partner then you will be seeking a different kind of pleasure. Experimentation in the bedroom may be necessary to keep your eyes from wandering. If single, an electric or kinky type of attractiveness will bring eccentric or different types of people within your range.

Saturn trine Uranus represents a transition phase in life which works so well with Pluto as the transformer. This is the ideal solar eclipse to make a positive change in your life because the grand trine will smooth out the more dramatic nature of the Pluto transformation. It will help you stay calm and patient, and plan every step methodically. This is also a good eclipse for experimentation and creative self-expression. So you can find new ways of doing old things without rocking the boat.

The star Castor conjunct Solar Eclipse July 2018 suggests misfortune and neurotic distress from deeply buried subconscious fear of disaster.Ý The eclipse opposite Pluto retrograde intensifies any distress or fears. Pluto also means you could be confronted by a crisis that forces you to take a serious look at an area of your life that is holding you back from happiness and success. Powerful forces are at play and they are out of your control. So the only way forward is to surrender your power and control to a higher force. Trust in instincts and trust in your spirit guides.

Pluto urges you to transform that negative, destructive or limiting part of your life. The fortunate grand trine allows you to apply this transformation to your love life, finances or creative work. The Solar eclipse July 2018 astrology is certainly intense but only lasts the four weeks until the August 11 solar eclipse. The grand trine shows potential and opportunity but needs conscious effort and hard work to manifest and avert a personal crisis. Remember to get started on your transformation before the July 27 lunar eclipse.

If the Solar Eclipse astrology chart directly affects your Sign you can read about it in your free Weekly Horoscope and Monthly Horoscope. For more details about how it affects your natal chart see Sun Transits.