Jack is a Nave!

Image: Jack cards of all four suits in the Rouennais pattern - Wikipedia


A jack or knave is a playing card which, in traditional French and English decks, pictures a man in the traditional or historic aristocratic dress generally associated with Europe of the 16th or 17th century according to Wikipedia. The usual rank of a jack, within its suit, plays as if it were an 11 (that is, between the 10 and the queen). As the lowest face (or "court") card, the jack often represents a minimum standard — for example, many poker games require a minimum hand of a pair of jacks ("jacks or better") in order to continue play. 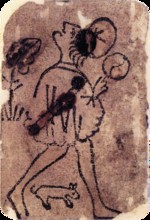 The earliest predecessor of the knave was the th?n? n?'ib (second or under-deputy) in the Mamluk card deck. This was the lowest of the three court cards and like all court cards was depicted through abstract art or calligraphy. When brought over to Italy and Spain, the th?n? n?'ib was made into an infantry soldier or page ranking below the knight card. In France, where the card was called the valet, the queen was inserted between the king and knight. The knight was subsequently dropped out of non-Tarot decks leaving the valet directly under the queen. The king-queen-valet format then made its way into England.

As early as the mid-16th century the card was known in England as the knave (meaning a male servant of royalty). Although jack was in common usage to designate the knave, the term became more entrenched when, in 1864, American cardmaker Samuel Hart published a deck using "J" instead of "Kn" to designate the lowest-ranking court card. The knave card had been called a jack as part of the terminology of the game All Fours since the 17th century, but this usage was considered common or low class. However, because the card abbreviation for knave was so close to that of the king ("Kn" versus "K"), the two were easily confused. This confusion was even more pronounced after the markings indicating suits and rankings were moved to the corners of the card, a move which enabled players to "fan" a hand of cards without obscuring the individual suits and ranks. The earliest deck known of this type is from 1693, but such positioning did not become widespread until reintroduced by Hart in 1864, together with the knave-to-jack change. Books of card games published in the third quarter of the 19th century still referred to the "knave" however, a term that is still recognized in the United Kingdom. (Note the exclamation by Estella in Charles Dickens's novel Great Expectations: "He calls the knaves, jacks, this boy!")

In the English pattern, the jack and the other face cards represent no one in particular, in contrast to the historical French practice, in which each court card is said to represent a particular historical or mythological personage. The valets in the Paris pattern have traditionally been associated with such figures as Ogier the Dane (a knight of Charlemagne and legendary hero of the chansons de geste) for the jack of spades; La Hire (French warrior) for the Jack of Hearts; Hector (mythological hero of the Iliad) for the jack of diamonds; and Lancelot or Judas Maccabeus for the jack of clubs.

In some southern Italian decks, there are androgynous knaves that are sometimes referred to as maids. In the Sicilian Tarot deck, the knaves are unambiguously female and are also known as maids. As this deck also includes queens, it is the only traditional set to survive into modern times with two ranks of female face cards. This pack may have been influenced by the obsolete Portuguese deck which also had female knaves. The modern Mexican pattern also has female knaves.

The figure of the jack has been used in many literary works throughout history. Among these is one by 17th-century English writer Samuel Rowlands. The Four Knaves is a series of Satirical Tracts, with Introduction and Notes by E. F. Rimbault, upon the subject of playing cards. His "The Knave of Clubbs: Tis Merry When Knaves Meet" was first published in 1600, then again in 1609 and 1611. In accordance with a promise at the end of this book, Rowlands went on with his series of Knaves, and in 1612 wrote "The Knave of Harts: Haile Fellowe, Well Meet", where his "Supplication to Card-Makers" appears, thought to have been written to the English manufacturers who copied to the English decks the court figures created by the French.

The cards shown here are from a Paris pattern deck (where the rank is known as the "valet"), and include the historical and mythological names associated with them. The English pattern of the jacks can be seen in the photo at the top of the article.

The jack, traditionally the lowest face card, has often been promoted to a higher or the highest position in the traditional ranking of cards, where the ace or king generally occupied the first rank. This is seen in the earliest known European card games, such as Karnöffel, as well as in more recent ones such as Euchre. Games with such promotion include: