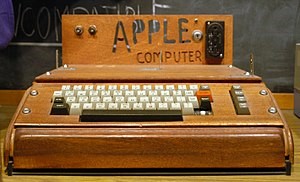 Today, according to Wikipedia, is the birthday of the first personal computer created by Steve Wozniak and marketed by his friend, Steve Jobs.


Apple Computer 1, also known later as the Apple I, or Apple-1, is a desktop computer released by the Apple Computer Company (now Apple Inc.) April 11, 1976. It was designed and hand-built by Steve Wozniak. Wozniak's friend Steve Jobs had the idea of selling the computer. The Apple I was Apple's first product, and to finance its creation, Jobs sold his only motorized means of transportation, a VW Microbus,[3] for a few hundred dollars, and Steve Wozniak sold his HP-65 calculator for $500; however, Wozniak said that Jobs planned to use his bicycle if necessary.[4] It was demonstrated in July 1976 at the Homebrew Computer Club in Palo Alto, California.

Production was discontinued on September 30, 1977, after the June 10, 1977 introduction of its successor, the Apple II, which Byte magazine referred to as part of the "1977 Trinity" of personal computing (along with the PET 2001 and the TRS-80).

On March 5, 1975, Steve Wozniak attended the first meeting of the Homebrew Computer Club in Gordon French's garage. He was so inspired that he immediately set to work on what would become the Apple I computer. After building it for himself and showing it at the Club, he and Steve Jobs gave out schematics (technical designs) for the computer to interested club members and even helped some of them build and test out copies. Then, Steve Jobs suggested that they design and sell a single etched and silkscreened circuit board—just the bare board, no electronic parts—that people could use to build the computers. Wozniak calculated that having the board design laid out would cost $1,000 and manufacturing would cost another $20 per board; he hoped to recoup his costs if 50 people bought the boards for $40 each. To fund this small venture, their first company, Jobs sold his van and Wozniak sold his HP-65 calculator. Very soon after, Steve Jobs arranged to sell "something like 50" completely built computers to the Byte Shop (a computer store in Mountain View, California) at $500 each. To fulfill the $25,000 order, they obtained $20,000 in parts at 30 days net and delivered the finished product in 10 days.

The Apple I went on sale in July 1976 at a price of US$666.66, because Wozniak "liked repeating digits" and because of a one-third markup on the $500 wholesale price.

The first unit produced was used in a high school math class, and donated to Liza Loop's public access computer center. About 200 units were produced and all but 25 were sold during nine or ten months.

The Apple I's built-in computer terminal circuitry was distinctive. All one needed was a keyboard and a television set. Competing machines such as the Altair 8800 generally were programmed with front-mounted toggle switches and used indicator lights (red LEDs, most commonly) for output, and had to be extended with separate hardware to allow connection to a computer terminal or a teletypewriter machine. This made the Apple I an innovative machine for its day. In April 1977, the price was dropped to $475. It continued to be sold through August 1977, despite the introduction of the Apple II in April 1977, which began shipping in June of that year. In October 1977, the Apple I was officially discontinued and removed from Apple's price list. As Wozniak was the only person who could answer most customer support questions about the computer, the company offered Apple I owners discounts and trade-ins for Apple IIs to persuade them to return their computers. These recovered boards were then destroyed by Apple, contributing to their rarity today.

As of 2013, at least 63 Apple I computers have been confirmed to exist. Only six have been verified to be in working condition.

The Apple-1 Registry lists all known Apple-1 computer. Including a list of all auctions since 2000.

In 2008, the website "Vintage Computing and Gaming" reported that Apple I owner Rick Conte was looking to sell his unit and was "expecting a price in excess of $15,000 U.S." The site later reported Conte had donated the unit to the Maine Personal Computer Museum in 2009.

In November 2010, an Apple I sold for Ł133,250 ($210,000) at Christie's auction house in London. The high price was likely due to the rare documents and packaging offered in the sale in addition to the computer, including the original packaging (with the return label showing Steve Jobs' parents' address, the original Apple Computer Inc 'headquarters' being their garage), a personally typed and signed letter from Jobs (answering technical questions about the computer), and the original invoice showing 'Steven' as the salesman. The computer was brought to Polytechnic University of Turin where it was fixed and used to run the BASIC programming language.

On June 15, 2012, a working Apple I was sold at auction by Sotheby's for a then-record $374,500, more than double the expected price. This unit is on display at the Nexon Computer Museum in Jeju City, South Korea.

In October 2012, a non-working Apple I from the estate of former Apple Computer employee Joe Copson was put up for auction by Christie's, but found no bidder who was willing to pay the starting price of US$80,000 (Ł50,000). Copson's board had previously been listed on eBay in December 2011, with a starting bid of $170,000 and failed to sell. Following the Christie's auction, the board was restored to working condition by computer historian Corey Cohen. Copson's Apple I was once again listed on eBay, where it sold for US$236,100.03 on April 23, 2015.

On May 25, 2013, a functioning 1976 model was sold for a then-record €516,000 (US$668,000) in Cologne. Auction Team Breker said "an unnamed Asian client" bought the Apple I. This particular unit has Wozniak's signature. An old business transaction letter from Jobs also was included, as well as the original owner's manual.

In November 2013, a working unit speculated to have been part of the original lot of 50 boards delivered to the Byte Shop was listed by Auction Team Breker for €180,000 ($242,820), but failed to sell during the auction. Immediately following the close of bidding, a private collector purchased it for €246,000 ($330,000). This board was marked "01-0046," matching the numbering placed on other units sold to the Byte Shop and included the original operation manuals, software cassettes, and shipping box autographed by Steve Wozniak. The board also bears Wozniak's signature.

In October 2014, a working, early Apple 1 was sold at auction for $905,000 to the Henry Ford Museum in Dearborn, Michigan. The sale included the keyboard, monitor, cassette decks and a manual. The auction was run by Bonhams.

On December 13, 2014, a fully functioning, early Apple I was sold at auction for $365,000 by auction house Christie's. The sale included a keyboard, custom case, original manual and a check labeled "Purchased July 1976 from Steve Jobs in his parents' garage in Los Altos".

On May 30, 2015, a woman reportedly dropped off boxes of electronics for disposal at an electronics recycling center in the Silicon Valley of Northern California, and they would now like to contact her. Included in the items removed from her garage after the death of her husband was an original Apple I computer, which the recycling firm sold for $200,000 to a private collector. It is the company's practice to give back 50% of the proceeds to the original owner when an item is sold, so they want to find the mystery donor.

On September 21, 2015, an Apple I bearing the Byte Shop number 01-0059 was listed by Bonhams Auctions as part of their "History of Science and Technology" auction with a starting bid of US$300,000. The machine was described as, "in near perfect condition." The owner, Tom Romkey, "...only used the Apple-1 once or twice, and ...set it on a shelf, and did not touch it again." The machine did not sell. However, Glenn and Shannon Dellimore, the co-founders of GLAMGLOW, a beauty company which they sold to Estee Lauder Companies, bought this rare working Apple-1 after the auction through Bonhams Auction house. On the 40th Anniversary of Apple Computers 2016 the Dellimore's working Apple-1 went on loan and on display at world-famous V&A 'Artifact' Museum in London, England. https://www.artfund.org/what-to-see/exhibitions/2016/09/10/you-say-you-want-a-revolution-records-and-rebels-1966-70-exhibition

On August 26, 2016, (the 40th Anniversary year of Apple Computers), the rarest Apple-1 in existence, an Apple-I prototype made and hand-built by Steve Jobs himself (according to Apple-1 expert Corey Cohen) and dubbed the 'Holy Grail' of computers was sold for $815,000 to winning bidders Glenn and Shannon Dellimore, the co-founders of cosmetics firm Glamglow, in an auction by Charitybuzz. The for-profit internet company that raises funds for nonprofit organizations declared that ten percent of the proceeds will go to the Leukemia and Lymphoma Society, based in New York.

On April 15, 2017, an Apple I removed from Steve Jobs's office by Apple quality control engineer Don Hutmacher was placed on display at Living Computers: Museum + Labs. This Apple I was modified by Dan Kottke and Bill Fernandez. This previously unknown unit was purchased from Hutmacher's heirs for an undisclosed amount.[citation needed]

Both Steve Jobs and Steve Wozniak have stated that Apple did not assign serial numbers to the Apple l. Several boards have been found with numbered stickers affixed to them, which appear to be inspection stickers from the PCB manufacturer/assembler. A batch of boards is known to have numbers hand-written in black permanent marker on the back; these usually appear as "01-00##" and anecdotal evidence suggests they are inventory control numbers added by the Byte Shop to the batch Apple sold them. These Byte Shop numbers have often erroneously been described as serial numbers by auction houses and in related press coverage.

Several Apple I clones and replicas have been released in recent years. These are all created by hobbyists and marketed to the hobbyist/collector community. Availability is usually limited to small runs in response to demand.

Replica 1: Created by Vince Briel. A software-compatible clone, produced using modern components, released in 2003 at a price of around $200.

PE6502: Created by Jason Putnam. A single board computer kit made with all through-hole and current production components. Runs Apple 1 "Integer BASIC", a clone of AppleSoft BASIC (floating point capable), Wozmon and Krusader- all built-in ROM. 32k of RAM, and a Parallax Propeller terminal. Software compatible with the Apple 1. putnamelectronics.com

Mimeo 1: Created by Mike Willegal. A hardware kit designed to replicate a real Apple I as accurately possible. Buyers are expected to assemble the kits themselves.

Newton 1: Created by Michael Ng and released in 2012. Similar to the Mimeo 1, but is said to be made using the same obsolete processing technique commonly used in the 1970s. Boards, kits and assembled boards are sold through eBay occasionally. There are both Newton NTI and non-NTI versions available.

Brain Board, a plug in firmware board for the Apple II that, with the optional "Wozanium Pack" program, can emulate a functional Apple-1.

Apple 1js, a web-based Apple I emulator written in JavaScript.

MESS, a multi-system emulator able to emulate the Apple I.

OpenEmulator, an accurate emulator of the Apple I, the ACI (Apple Cassette Interface) and CFFA1 expansion card.

Apple 1 Emulator, an emulator for the SAM Coupé home computer.

CocoaPom, a Java-based emulator with a Cocoa front end for Macintosh.

Sim6502, an Apple I emulator for Macintosh.

Green Delicious Apple-1, an emulator for the Commodore 64.