The Best Meteor Showers in 2018 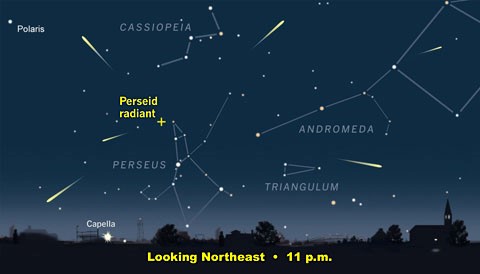 Image: The Perseid meteor shower is so named because even though its "shooting stars" can appear anywhere in the sky, their streaks can all be traced to the constellation Perseus.
Sky & Telescope diagram

Looking ahead and with the Lyrid meteor shower coming in two weeks, here's an article on exactly what they are.

More than a dozen times each year, we experience a strong pulse of "shooting stars" from an annual meteor shower. Sky & Telescope predicts that the two best meteor showers in 2018 will be the Perseids in mid-August and the Geminids in mid-December.

Imagine lying on a soft patch of grass and admiring the starry night sky overhead. Suddenly, you spot a bright streak that comes and goes literally in a flash. You've just seen a "shooting star," and it's time to make a wish — maybe for another one that's even brighter!

There's a chance that your wish will come true, because if you're looking up from a dark location, far from city lights, you'll see brief streaks from meteors a few times every hour. They can catch your eye just at the limit of visibility or be dramatically bright fireballs that appear brighter than Venus and light up the nightscape around you. The rarest of these, called a bolide, shatters into pieces during its rapid descent.

The little nuggets in Grape-Nuts cereal are a close match to the size of particles that typically create meteors in our atmosphere.

Derived from the Greek word meteoros (meaning "high in the air"), meteors are bits of interplanetary debris that slam into Earth's upper atmosphere at speeds of 30 to 70 km (20 to 45 miles) per second! And although some meteors look bright enough that it seems you can almost touch them, actually they occur very high up, at altitudes of 80 to 120 km (50 to 75 miles).

Because they're arriving so fast, it doesn't take a very large particle to make a dramatic flash. Typically they're no bigger than big sand grains, and something the size of a pea can create a meteor that's dramatically bright. Those high velocities give each particle a lot of kinetic energy, which converts to heat due to friction in the upper atmosphere.

Many people think a meteor occurs because the particle is "burning up." But actually friction flash-heats air molecules along the particle's path to thousands of degrees. The air molecules cool down in just a split second, giving off light as they do so.

What is a Meteor Shower?

Meteors can occur at any time on any night and appear in any part of the sky. On a dark, moonless night you might see a half dozen of these sporadic (random) meteors per hour. However, whenever Earth encounters a stream of gritty debris left in space by a passing comet, the result is a meteor shower.

You'll notice the difference if you watch the sky for a half hour or so during one of these events: not only do the number of meteors you'll see go up, but also the meteors seem to fly away from a common point in the sky called the radiant.

This is a trick of perspective, because all these particles are traveling in parallel — part of a vast but sparse "river of rubble" that's spread all around the comet's orbit. To get a better sense of this, check out the interactive animation below, which is part of a set created by Ian Webster. It shows particles along the orbit of Comet 109P/Swift-Tuttle, which is the comet responsible for the Perseid meteor shower. (Have some fun with it: click and drag to get different perspectives):

A shower gets its name not from its parent object but from the constellation where this radiant lies — for example, August's well-known Perseid shower has its radiant in Perseus, December's Geminids appear to radiate from Gemini, and so forth. One notable exception to this rule is the Quadrantid shower, named for the now-defunct constellation Quadrans Muralis. Its radiant lies in the constellation Boötes. In any case, the higher a shower’s radiant, the more meteors it produces all over the sky.

The descriptions and table below highlight the year's best and most dependable displays, but the International Astronomical Union now recognizes more than 100 well-defined meteor showers and hundreds of other candidates that haven't been confirmed. Most of these are so weak that it takes a trained observer to spot them.

Meteor showers usually peak during the predawn hours on the dates listed below, though they're often active a few nights before and after the peak date. Note that the rates listed are for ideal conditions: very dark skies free of moonlight or light pollution, with the radiant nearly overhead. Most likely you'll see somewhat lower rates than those listed. Following the table are specific predictions for each shower's prospects during 2018.

Dynamicists have gotten rather good at predicting when a particular shower might display an extra burst of activity. Usually these are from concentrated "ribbons" of particles that might have been ejected by the parent comet decades or even centuries ago. However, no such outbursts have been predicted for any of the known meteor showers in 2018. It's shaping up to be a relatively normal year.