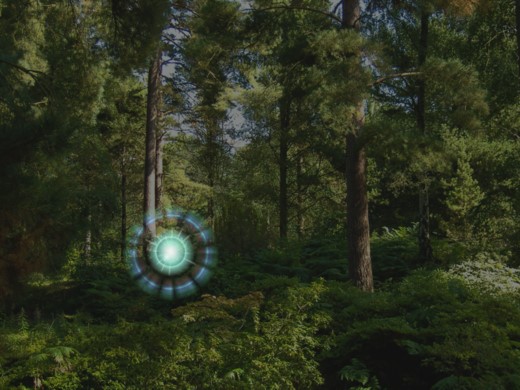 A mysterious light floating in the trees of Gurdon, Arkansas may be a piezoelectric effect according to atlasobscura.com.

The Gurdon Light is said to be an eerie white-blue, sometimes orange, glowing light that moves through the trees near the railroad tracks, off Interstate 30 in southern Arkansas.
Local legend has it that the light is the lantern of a railroad worker who fell on the tracks and was beheaded, or in another variation the light of a worker who was killed in a brawl on the tracks. Thought by most to be too far from the highway to be car lights, the light remains a mystery. Some scientists have postulated the possibility of a piezoelectric effect.

Piezoelectricity is generated by materials such as certain ceramics and crystals, which when bent or squeezed generate electricity and sparks. A very similar phenomenon (triboluminescence, which generates electricity and light when a material is broken rather then bent as in piezoelectricity) can be seen in the sparks of WintOGreen Lifesavers.

One possible explanation for the Gurdon light is that underground quartz crystals in the area are under constant stress and cause an electric reaction that results in the glow. Unlike other mysterious lights, the Gurdon Light is reported to always be present, but only visible at night. The light has been chronicled by the television show Unsolved Mysteries and remains a Halloween favorite for locals.

About 75 miles south of Little Rock, down Interstate 30, just east of Interstate 67, pull over at the railroad tracks, and walk down the tracks about two miles, crossing four creek bridges. Alternative: It may be difficult to find from I-67. The better way may be to get off I-30 at state road 53 and turn right on a dirt road just before where the tracks cross 53, about half-way from I-30 to down-town Gurdon. The only way to find this spot is to look for the unlabeled tracks crossing 53 on Google maps. There's also a small pull-over on the left (if you're coming from I-30) close to where the tracks used to cross the road (which are now invisible from 53).