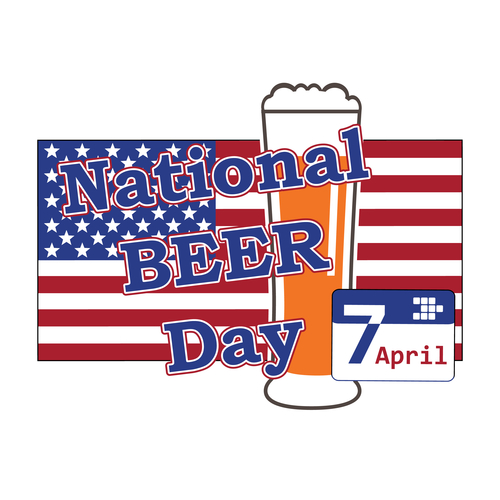 Beer as a beverage has been around for thousands of years, but it's only recently that, unofficially, some countries have come to celebrate its day.  In this article from Wikipedia we learn all about National Beer Day.

United States
Recognized nationwide among beer enthusiasts, National Beer Day is an unofficial holiday in the United States celebrated every year on April 7, and marking the day in 1933, the first day in 13 years, that people could legally buy, sell, and drink beer.

National Beer Day is a celebration of the Cullen–Harrison Act being signed into law by President Franklin D. Roosevelt on March 22, 1933. Upon signing the legislation, Roosevelt made his famous remark, "I think this would be a good time for a beer." The law went into effect on April 7 of that year, allowing people to buy, sell and drink beer containing up to 3.2% alcohol by weight (or 4.05% by volume) in states that had enacted their own law allowing such sales. People across the country responded by gathering outside breweries, some beginning the night before. On that first day, 1.5 million barrels of beer were consumed, inspiring the future holiday. Today, April 7 is recognized as National Beer Day and April 6 is known as New Beer's Eve.

Speaking of April 6, we turn to the celebration in Great Britain

On 27 March 2009, the British Parliament made a motion to officially recognise 6 April as National Beer Day.

"That this House welcomes the forthcoming National Cask Ale Week, the world's largest ale festival, from 6 to 13 April 2009, a week of campaigning across the United Kingdom to promote the importance and pleasures of drinking real ale in pubs; supports the aim of National Cask Ale Week to denote 6 April as National Beer Day; notes the economic strength of the cask ale industry as demonstrated by sales figures from the Small Independent Brewers' Association in November 2008; expresses hope that National Cask Ale Week will succeed in entering the Guinness Book of Records for the world's biggest toast, a record breaking attempt which will take place on 11 April 2009; and encourages hon. Members to support their local pub's participation in National Cask Ale Week."

National Beer Day was originally called for by brewers in an effort to "save the great British Pub" which in 2009, were closing at a rate of five per day.

Iceland does it a bit earlier and a bit differently.

In Iceland, Beer Day (Icelandic: Bjórdagurinn or Bjórdagur[1]) is celebrated every year on March 1, honoring the elimination of the 74-year prohibition of beer. Prohibition lasted from 1915 to March 1, 1989.

Prohibition in Iceland - In a 1908 referendum, Icelanders voted in favor of a ban on all alcoholic drinks, going into effect Jan. 1, 1915. In 1921, the ban was partially lifted after Spain refused to buy Iceland's main export, fish, unless Iceland bought Spanish wines; then lifted further after a national referendum in 1935 came out in favor of legalizing spirits. Strong beer (with an alcohol content of 2.25% or more), however, was not included in the 1935 vote in order to please the temperance lobby—which argued that because beer is cheaper than spirits, it would lead to more depravity.

As international travel brought Icelanders back in touch with beer, bills to legalize it were regularly moved in parliament, but inevitably were shot down on technical grounds. Prohibition lost more support in 1985, when the Minister of Justice (himself a teetotaler) prohibited pubs from adding legal spirits to legal non-alcoholic beer (called "pilsner" by Icelanders) to make a potent imitation of strong beer. Soon after, beer approached legalization in parliament—a full turnout of the upper house of Iceland's Parliament voted 13 to 8 to permit the sales, ending prohibition on the island.

I remember a lot of drinking and a lot of pissing all night long and the next days, and it [was] not stopping. This was the day Icelanders took the step to try to become civilized. Ölstofan was not open then, but the idea of owning a bar started there.

Following the end of prohibition, Icelanders have celebrated every Beer Day by imbibing the drink in various bars, restaurants, and clubs. Those located in Reykjavík, the capital and largest city in Iceland, are especially wild on Beer Day.; A Rúntur (pub crawl) is a popular way of getting to know the various bars and beers in this city, many being open until 4:00 a.m. the next day.[8] The legalization of beer remains a cultural milestone in Iceland, and a major seismic shift in the nation’s alcoholic beverage preference. Beer has today become the most popular alcoholic beverage of choice.

The celebration of Beer Day in Iceland has inspired a similar event in the U.S., known as Iceland Beer Day, or IBD.