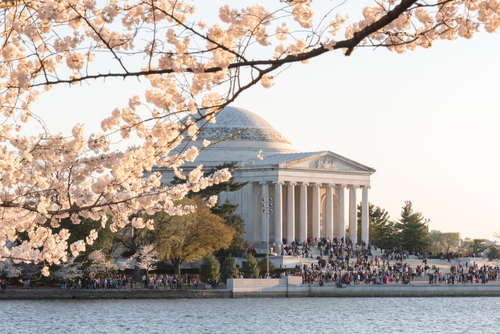 In 1912 the Japanese government gifted 2,000 cherry trees which were planted around the tidal basin in Washington, D.C. and are the basis for the US Cherry Blossom Festival.

In a ceremony on March 27, 1912, First Lady Helen Herron Taft and Viscountess Chinda, wife of the Japanese ambassador, planted the first two of these trees on the north bank of the Tidal Basin in West Potomac Park.

At the end of the ceremony, the First Lady presented Viscountess Chinda with a bouquet of 'American Beauty' roses. These two trees still stand at the terminus of 17th Street Southwest, marked by a large plaque. By 1915, the United States government had responded with a gift of flowering dogwood trees to the people of Japan.

Because the weather can be so fickle, the festival is sometimes moved to coincide with the fullest time of blossom.  WTOP-TV a local Washington, D.C. station reports fickle weather has once again changed D.C.'s cherry blossoms' predicted dates of peak bloom, the National Park Service announced Tuesday.


WASHINGTON — Once again, fickle weather has changed the predicted bloom dates for D.C.’s cherry blossoms. National Park Service officials are now saying that the best time to see the blossoms is on March 23 and March 24.

Cherry blossom season is one of the most anticipated times of the year in D.C. Here’s a peek at what you can expect to see when the trees are in peak bloom.

Initially, park officials thought the cherry blossoms would reach peak bloom at the end of the month.

“It’s really like nothing else we do, trying to predict something that so many people are counting on,” Litterst said last week.

This year’s National Cherry Blossom Festival, which marks the anniversary of Japan’s gift of 3,000 cherry trees, runs from March 20 through April 17. It’s one of D.C.’s biggest tourism events.

But peak bloom doesn’t always coincide with the festival’s dates. Peak bloom is when 70 percent of the trees around the Tidal Basin are in blossoming. Once in bloom, the flowers can last four to 10 days, depending on weather conditions.

Litterst says when the prediction is made more than a week in advance, it’s tricky to get it exactly right, especially as Mother Nature tends to change plans without warning in the spring.

The earliest the cherry blossoms have bloomed was on March 15 in 1990, Litterst says.

The revised peak bloom date is causing the park service to move up the opening of the Tidal Basin Welcome Area too. The area, located near the paddle boats at Maine Avenue SW and Raoul Wallenberg Place SW, will now be open from March 18 — April 3 (it was previously scheduled from April 2-17).