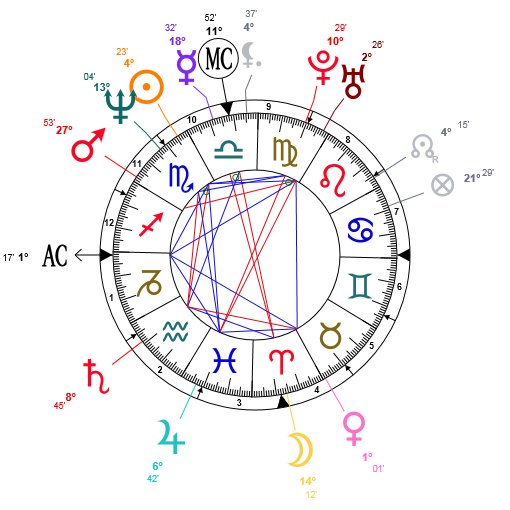 We all wish we could know in advance how a relationship is going to turn out.  Here in an article from astrotheme.com we learn about the composite relationship chart.  Maybe if we did one for each and every person who walked into our lives we might just be able to understand the why and how of that interaction.  In this article and chart from astrotheme.com we find out exactly how it's done and what it can be used for.

The composite chart is a quite recent synastry technique which emerged in the early '70s. Ronald Davison and Robert Hand are among the astrologers who contributed to broaden its use for the assessment of the level of compatibility between two charts. The technique consists in calculating the mid-point of pairs of planets, angles, and foci of the partners' natal charts.

This technique, as well as that of the mid-space mid-time chart, must be taken with caution since its reliability has not been established yet, contrary to the traditional Compatibility Report which is based on the comparison between two natal charts and the analysis of their inter-aspects.

A composite chart should be read similarly to a natal chart, but with the difference that planets, angles, and houses only are considered. Signs are not relevant. The angular houses (1st, 4th, 7th, and 10th) are the most important ones and, for a couple, it is a better omen when planets are posited in these houses. The 5th and 11th houses are favourable for the blossoming of the relationship, and the 2nd and 8th houses, for sexuality and emotions. The 6th - 12th houses axis is a bit trickier. Aspects are interpreted in the same way as with the natal chart, bearing in mind that they define the relationship and not an individual. The usually accepted orbs are the same as those used in the natal chart.

The advantage of the composite chart is that it shows the dynamics of the relationship in a quick and simple manner, almost at a glance. It always sheds additional and interesting light to the classical synastry technique of charts comparison.